The Independent chose an image of young girls wearing headscarves to accompany an article about sex workers in Pakistan, with no relevance between the two. This is the UK’s media monitoring highlight for April.

This article is part of the Media Monitoring Highlights of April, a monthly overview of the most significant results of our monitoring of traditional and new media in Belgium, France, Germany, Greece, Hungary, and the United Kingdom. 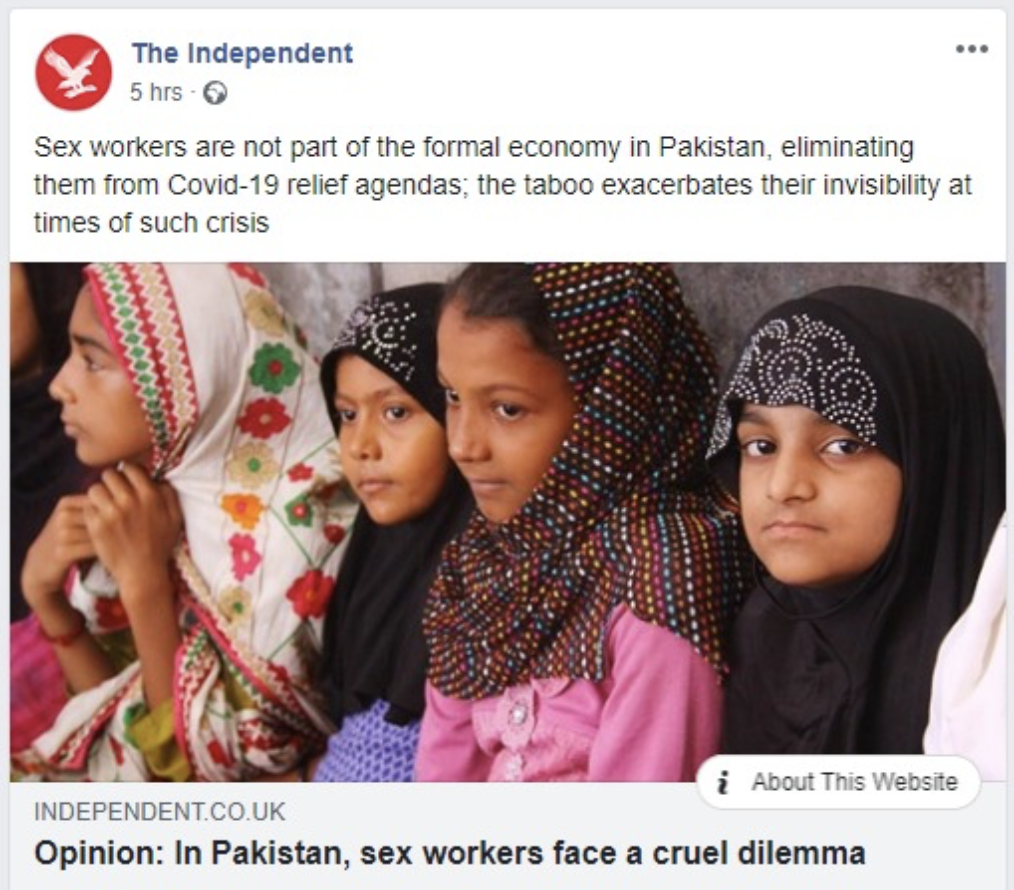 Description of the anti-Muslim content: The Independent published an article titled “In Pakistan, sex workers face a cruel dilemma.” The article explores how sex workers in Pakistan are affected by the coronavirus and social distancing measures, and are not properly protected. When promoting the article on Facebook, The Independent used an image of young girls wearing head scarfs. The article at no time mentions underage girls or Islam, and so it was confusing to many why this picture was chosen. Many complained to the publication, who changed the image to one which showed coronavirus emergency workers, which is much more relevant to the content of the article.

Myth debunked: The image and headline that accompanies a news article are just as important, and sometimes even more powerful, than the content of the piece. This is especially the case when it comes to promoting articles on social media platforms, where many people will scroll past a post like this without reading the article. In such a case, what message is being sent? They equate the headline, which refers to sex workers in Pakistan, with young Muslim girls and likely form assumptions, whether that is consciously or not. The Independent’s choice to use this image to accompany the article is both unwarranted and unethical, and can lead people to act on ill-informed assumptions that negatively affect minorities, in this case Muslims. It is likely that the person responsible for choosing this image did not consciously pick it to convey this negative narrative; however, this is precisely the problem. Media organisations need to be more aware of the pictures they are choosing, and the impact of them. We covered this topic recently, focussing on the bias often displayed through stock photography, and concluded: “So why are journalists and editors still making ill-informed decisions when it comes to news and media images? It seems that oftentimes, they are unaware of their bias and the effect this can have on communities.”

A Picture is Worth 1,000 Words: How Stock Photography Shapes Unconscious Bias

A Long Way to Go: Minorities and the Media

Make sure you enter all the required information, indicated by an asterisk (*). HTML code is not allowed.